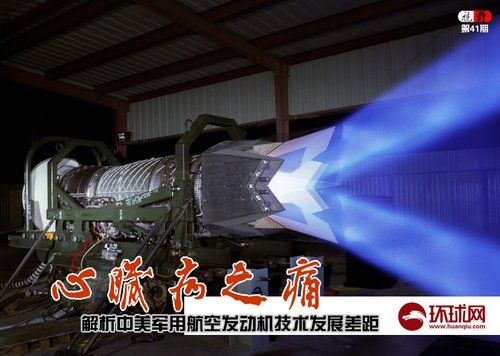 China is committed to the development of domestic high-performance aero-engines. The strategic direction for equipped domestic military aircraft has been clarified. This strategic choice contains major aviation technical challenges. Only a few large companies in the world truly master this technology. This is not surprising in itself: the engine is as important to the aircraft as the heart to the human body. The design and development of the engine is faced with a series of severe problems such as temperature, pressure and overload. Only the most advanced materials, the most suitable processing methods, scientific design, and reasonable use and maintenance can solve these problems. In recent years, China has made some advances in materials and manufacturing, but there are still problems in component and system design, integration, and the development of service and usage management solutions based on reliability characteristicsâ€”these are key to optimizing engine performance. 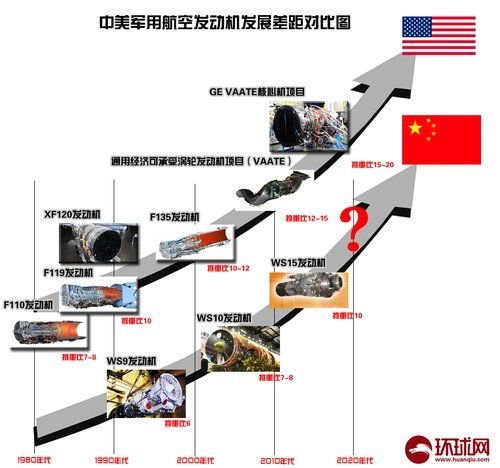 The gap between China-US aviation engine technology is disturbing. In the 1980s, when the F-15 fighter jets began to install the F-110 engine with a push-to-weight ratio of 8, the same period of China was still struggling with the backward turbojet engine. Today, even though we have made great achievements on the WS15 engine, we still have a gap with the US for at least 30 years. The Chinese turbofan-10 "Taihang" turbofan engine and its improved performance indicators are comparable to the US Pratt & Whitney F100 and General Electric F110. These two engines are the power units of the US F-15 and F-16 fighters. The "Taihang" family is said to be the driving force of the æ­¼11B, and may eventually replace the Russian-made AL-31, becoming the driving force for the æ­¼10 and æ­¼15. In November 2010, a media report reported that a turboprop 10 "Taihang" engine with a thrust of 27,500 pounds (about 125 kN) has been put into production and will be used to equip the æ­¼11B. Despite this, there is still evidence that AVIC has problems in controlling the quality stability during the turbofan-10 mass production process, resulting in insufficient engine reliability, resulting in Chinese fighters still relying heavily on Russian imported engines.

The US Air Force and the Industrial Division began the development of the 'Integrated High Performance Turbine Engine Technology' program in 1987, and it was basically completed around 2000. In order to maintain technological development, the succession plan 'General Economics withstand Advanced Turbine Engines' was initiated by the US Air Force Laboratory and its industrial partners. In August 2003, three comprehensive contracts were awarded to General Electric, Pratt & Whitney and Rolls-Royce. The program focuses on the entire propulsion system and affordability. The goal of the lock is to increase the cost performance of the engine by 10 times in 12 years. The 'Adaptive General Engine Technology' project is a typical project in the GM's affordable advanced turbine engine program. The goal is to develop the ability to optimize engine performance by changing fan, core machine flow and pressure ratio within the flight envelope. One application of these adaptive technologies on the engine is the Variable Cycle Engine (VCE), which meets the needs of high-speed flight, as well as low-speed standby long-life or long-lasting flight and economical requirements.

The silicon powder is used as a raw material, and the desired shape is first formed by a usual molding method, and preliminary nitriding is performed in a nitrogen gas at a high temperature of 1200 Â° C, and a part of the silicon powder is reacted with nitrogen to form Silicon Nitride, and the entire billet is then formed. The body already has a certain strength. Then, a second nitriding is carried out in a high temperature furnace at 1350 Â° C to 1450 Â° C to form a silicon nitride. A silicon nitride having a theoretical density of 99% can be obtained by a hot press sintering method.