Feicheng, located in the west of Taishan Mountain, has the largest peach garden in the world. It has a history of cultivation for thousands of years. It is said that the mahogany branches in the southeast have the effect of disaster prevention and evil. Recording the history of the southeast mahogany branch to avoid evil has a long history. The source of the Tao: the ancient peach trees carved in the southeast direction, the Taomu people, standing in the household to avoid evil, Han Shi, carved peach printing hanging on the portal, known as Tao Yin, later Han Shu Zhizhong [A midsummer month, everything is square, the summer is the yin and the temperament, the terror is not awkward]... The peach print is six inches long and three inches, the five-color book is like the law, to the portal, the Song Dynasty Tao Fu [two ancient books hanging on the door of the gods with the name of the door of the peach tree] means to suppress evil. Now, the folks of Southeast Asia are placed in the household with peach swords to avoid evil. <Taiping Yulan> cited <å…¸æœ¯>: peach The five woods are also fine, the ancient pressure of evil spirits, this fairy wood also, the fineness of the peach wood in the ghost door, the system of ghosts, so now do the peach wood sword to suppress evil, this fairy technique also.

The legend of peach and wooden ghosts is colorful, <Huainanzi. Interpretation> says "Different death from peach" Donghan Xu Shen Note: "Mouth / cane, with peach wood, to kill ç¾¿" legend, ç¾¿Known for good shooting, every student learns art, and after learning, he will be enemies, and he will be poisoned by the teacher. He lifts the mahogany stick and slams into the back of his head. After he died, he made an official reading the hundred ghosts. In addition, in ancient times In mythology, Kuafu chased the sun, died of thirst, and turned into a peach tree after death. The peach tree was said to be the hero of the pursuit of the sun, which is probably also a reason to believe that Taomu can make evil spirits. Thousands of peach trees are dark red and shiny, and the mahogany is strong and elastic. It is used as a blow or self-defense. It is a good tool. These characteristics may be the initial basis of the legend of Taomu. 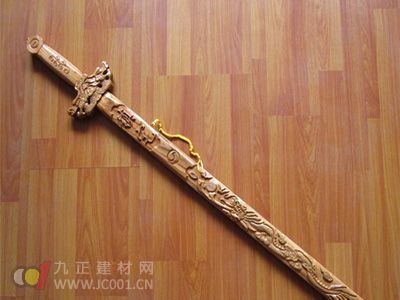 The legend of Taomu evil spirits

According to ancient books: Peach, a large and excellent, sweet and beautiful, produced in the fat country and crowned with fat peach, also known as Buddha peach, has a thousand years of cultivation history, for the royal tribute of the past, famous reputation At home and abroad,

Feicheng mahogany, dense and delicate, woody fragrance, is the god of evil spirits, and won the favor of Taoist alchemist.

Taomu evil spirits may originate from the legend of Houyi. The ancient book records that the Houyi was killed by the mahogany stick and was sealed as a Zongbu god after death. This god is often under a peach tree, holding a tiger. Every ghost must go to the test, and Zongbu God will smell it. If it is a evil spirit, it will be eaten by the tiger. One said that it is related to Kuafu. According to legend, Kuafu is chasing after the hunger and thirst, and before dying, The rod in his hand was thrown into a piece of Deng Lin, also known as Taolin, in order to allow the later generations to catch up with the sweet and delicious peaches. Because Kuafu has a close relationship with the sun, the ghosts will be afraid of the mahogany.

The alchemist symbolizes the use of swords to drive out evils and evil spirits. In many novels in China, the Taoist alchemists use them. The mahogany sword, "The God of the Gods" is used to help the king to eliminate the demon in the palace is the mahogany sword, a small sword, almost let the thousand-year-old nine-tailed fox æ˜¾ Ji Xian shape, in China Folk, mahogany has always been an important tool for evil spirits.

Shandong Feicheng is famous for its â€œFo Taoâ€. The buddha tree grows on the mountain and absorbs the essence of the sun and the moon all the year round. The peach tree grows in a special geographical environment, and the fruit has a large shape and a beautiful fragrance. Feicheng Buddha Taoyuan is recognized as the world's first peach garden.

In ancient Chinese mythology, there is a world of ghosts. There is a mountain in it. There is a large peach tree covering three thousand miles on the mountain and a golden chicken on the treetop. Whenever the golden rooster screams in the morning, the ghosts who go out to wander at night will rush back to the ghost field. The gate of the ghost domain is located in the northeast of the peach tree. There are two gods standing by the door, named Shen Yu and Yu Lei. If the ghost does something that is damaging in the night, the gods and the scorpion will immediately find and catch it, bundle it with a rope made of mang, and send it to the tiger. Therefore, the ghosts of the world are afraid of gods and stagnation. So the folks used peach wood to engrave them and put them at their doorsteps to avoid evil. Later, people simply engraved the name of Shenque and Yu Lei on the peach board, and thought that this would also be a good evil. This peach board was later called "Peach."

In the Song Dynasty, people began to write couplets on peach boards, one did not lose the meaning of Taomu Zhenxie, the other expressed their good wishes, and the three decorated the portal for aesthetics. It is also written on the red paper that symbolizes happiness and auspiciousness. It is posted on both sides of the door and window during the Spring Festival to express people's wish for the good fortune of the coming year.

"Thousands of thousands of households will be replaced by old ones." The mahogany ward off evil, the folklore has long been awkward, what originated from when, from what?

The legend of Taomu Zhigui is rich and colorful, "Huainanzi &*dot; Interpretation" said: "Dang died in Taokou." The Eastern Han Xu Shen Note: "The mouth, the big stick, the peach wood for it, to kill the cockroach, since the ghost is also peach." He is known for his good shots. He is a teacher and learns his skills. After he learns, he will report to the enemy. He will be poisoned from behind the teacher and raise the mahogany stick to the back of the skull. After the death, he was the official who led the ghosts. The association of the ancients about the removal of evil from the trees was related to this myth. Imagine that the mahogany sticks can even kill all the ghosts, and it is even more important to treat ghosts.

In addition, "Zuo Zhuan" Zhaogong four years (538 BC), recorded a thing that Taomu can play mysterious power: "The ancient day is hidden in the Hokuriku, ... its hidden, black oysters, In order to enjoy the cold, it is also the result of the peach arc, in addition to its disaster." This passage is said: the ancients hid the ice in the hail of the deep valley in the winter, when using the black male livestock And the black ritual sacrifices the god of cold, and when using ice, the ritual of disaster relief is carried out with a bow made of mahogany and a ratcheted arrow.

Peach, the essence of Wumu is also, so the pressure is also evil.

The ancient fat country, today's Shandong Feicheng, was named after the Fei people in the Western Zhou Dynasty. At that time, the fat people moved from the East China Sea. The treasure of Zhenshan, the treasure of the mountains in the East China Sea, was transplanted to the fat country by the fat people. "Han Shu & *dot; Geography" contains: "Taishan County has Feicheng County, should be called the "Fatty Country" also." According to the Qing Emperor Guangxu seventeen years (AD 1891) "Feicheng County Zhi & *dot; ":" "Feicheng ancient fat country, also into the Lu in the Spring and Autumn Period, for the county.

Feicheng planted peach history for a long time, "Spring and Autumn Zuo Zhuan" contains: Lu Yigong 17 years, Qi State and Lu State battle, Qi Bing two roads, surrounded by the two wings of Lu Guo: one is the house, one is peach, that is Qiren Wai Lubei wall. In the 13th year of Lu Yigong, the border of Lu State has arrived in the Changqing area of â€‹â€‹Jinan today. Therefore, the â€œPeachâ€ surrounded by Qiren should be the Feicheng in the south of Changqing (the present is the Qi Great Wall in the north of Feicheng). This place has already planted a lot of peach trees. The author of Zuo Chuan, Zuo Qiu Ming, is a Feicheng person, which further proves that Feicheng is â€œPeachâ€ and â€œPeachâ€ is Feicheng.

So why do you say that only the peach trees in Feicheng can avoid evil?

Originally in the west of the old Feicheng County, there is a mountain named Tao (Peach) Mountain, between Taoshan and Xiaotai Mountain. Surrounding the top of the mountain is the cliff that rises through the sky. It is steep and steep, stretching for dozens of miles, 72 caves. Scattered on the cliffs, these seventy-two holes, the caves have devils and ghosts. When night falls, the seventy-two-hole monsters will drill holes and break into Feicheng. The group will dance indiscriminately, making waves and making waves, harming the people and painting charcoal. The matter spread to the mountains of the East China Sea. The gods on the mountain and the gods of Yu Lei were unstoppable. They quickly flew to Feicheng, took the materials on the spot, folded the peach branches as weapons, and killed the dead monsters, wounded and wounded. escape. The monsters who fled fortunately saw the peach sticks fluttering. Because the East China Sea and Feicheng are in the northwest-southeast direction, the Shenshu two gods walked to Feicheng, and the peach branches are southeast, so the peach branches in the southeast have an aura. After that, the local people will fold the mahogany branches to the southeast, or make a sword hanging in the room, or carved into peaches, peaches hanging on the beams, behind the door, the devils and ghosts fleeing, never dare to come forward. In the Han Dynasty, "Traditional Customs" said: "The custom of the waxy New Year's Eve with the peaches... the sunflowers are defending the fierce" is actually an explanation of the evil spirits of the gods and gods.

Recording the history of Taomu and warding evil is far away. "The source of the word" contains: the ancient times, the Taomu people, standing in the household to avoid evil. In the Han Dynasty, the carved peach print was hung in the Tou, called Taoyin. After the Han Shuyizhi "the midsummer month, everything is square, the summer is the yin and the temperament, the terror is not awkward"... The peach print is six inches long, three inches, and the five-color book is like the law. In the Song Dynasty, the gods and the sacred gods were engraved on the two door panels. They were also called "Peach Symbol" or "Door God", "... Bai Ghost".

It can be seen that only the mahogany can avoid evil, and only the peach wood of Feicheng is the real "falling demon".

There are different legends about the ability of Taomu to ward off evil, but after all, mahogany is a symbol of good fortune.